By Shakuntala Natarajan  Published On October 4, 2020

“Humor” is an excellent medium of expression and engagement. For instance, if you were sitting in a stand-up comedy show right now, how will you feel? If the cheerful comedian manages to tickle your funny bone, you will feel greater enthusiasm and eagerness to listen to the jokes as the time goes. Right? But will you feel the same energy when you are listening to a monotonous lecture or sermon? No, it might bore you horribly. The humor element made a difference in the above two situations.

To make communication engaging, do you think being humorous in tone can help? Can humor embellish the way of communicating a variety of topics, ranging from issues of common interest to byzantine theories in science? The answer is a big YES. But humor is a relative emotion. What sounds humorous for one, need not be humorous for the other. Also, can audience reactions like laughter heighten the effects of humor? To know the answers, we read an interesting study, to bring you, science communicators, some amusing information.

Public engagement in science communication through laughter as a medium 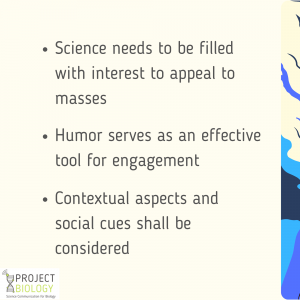 Giving more thought to the efficacy of cheerful dialogues, evaluating humor’s usefulness in activities like Science communication becomes significant. Researched extensively, humor proves as an effective tool for engagement and communication. But something else remains to be researched. It is the effect of contextual aspects and social cues like laughter, silence, applause, and others, in influencing the people’s response to humor-filled communication and audience engagement. Struck by the notion, the group of researchers from the USA went on to know if audience reactions like laughter to humor-filled science communication adds spice to and improves the flavor of science among the common people!

In general, scientists are technically sound and focus on intricate details. So, they may find it difficult to talk about science in a general way for the average person to understand. To make science reach the masses, it has to be interesting and filled with fun. That is where humor pitches in. Scientific scholars, as well as scientific organizations, have encouraged the seeping of humor in science. For instance, the American Association for Advancement of Science hosted a unique event called “Science comedy nights” in one of their meetings. Given the burgeoning influence of humor in science communication, it becomes necessary to assess the audience’s approval of elements of humor in science engagement and popularization. This is the aim of the study discussed today.

The idea behind the study

The study took up the case of stand-up comedy performed by a scientist to test the effectiveness of humor in science communication. The idea of the study was to test the differential response of a participant to two versions of the same video.

The whole idea behind the study was to find if small changes in humorous contexts have significant effects on audiences. So,  the researchers assessed the effect of audience reaction like laughter on the level of scientific endorsement and engagement by people who viewed the funny science video.

For this, 217 undergraduate students from a large public university in the United States, participated in the experiment. Before the actual study, the participants took up a pretest survey. This test helped assess the participant’s level of interest in science, conceptual knowledge, disposition towards humor, and so on. For the experiment, the researchers chose a stand-up comedy video featuring German physicist and comedian Vince Ebert. In the video, Mr. Vince Ebert talks on the topic-“Science is the best we have got,” which focuses on general notions in science.  Let us now see about the experimental design followed. 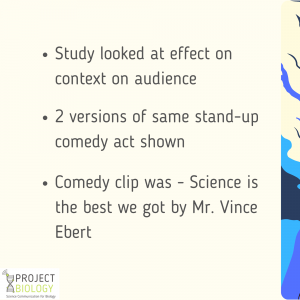 After this, all the participants undertook a post-test survey. The post-test survey measured the video engagement, veracity, and explanation of the video content as perceived by the participant with a few questions. The fact that the chosen video did not discuss any debatable topic, but focused on science in general, shows the fairness of the experiment. Also, the researchers removed YouTube logos, advertisements to remove any distractions.

Inferences and perspectives from the study

Do people who are greatly interested in experiencing and watching science entertainment, have greater enthusiasm for supporting and sharing scientific content? Do such people involve more in science engagement?

It was found that people who viewed the video with audience laughter showed greater amusement than those who viewed the same clip without audience laughter. Thus laughter acts as a contagious stimulus here. It might have even influenced people who didn’t find the video funny. Such people may have been influenced only because of the audience’s reaction, which might have given a good impetus. So, laughter can be taken as a social cue that heightens the response to video content. Even if the individual does not enjoy it personally.

When people derive greater amusement from watching such humor tinged science videos, do they get more involved in activities of science content endorsement and engagement?

People who found the video more fun and derived great amusement from it showed more tendency to endorse scientific content. They also tended to engage more in science-related matters. People who watched the video accompanied by audience reaction showed greater mirth or amusement, as seen before. So audience reactions and social stimuli like laughter can effectively influence and stimulate content endorsement and engagement in science.

Will, a person’s preference to experience external humor influence and moderate the relation between amusement derived from watching funny science content and participating in science engagement and content endorsement?

The results for this particular question were not conclusive. It was because there was a lack of support for significance from the statistical analysis part.

Content affinity can be thought of as a measure of people’s preference for how content is presented. For example, the way the content is narrated and packaged. The study showed that the relation between content affinity and science endorsement was significant. The study specifically evaluated humor affinity of the participant, since it is the focus of the work. People with low humor affinity showed improved science engagement and endorsement of scientific content if they found the video to be engaging and amusing. But those with high humor affinity showed even more improved levels of both content endorsement and engagement when they found the video to be amusing and enjoyable.

Humor with context – A powerful tool for public engagement

We have now come to the final touching of this interesting study. This work is a tad different from other works. It focuses more on the contextual factors that affect the public response to humor in science communication. In the future, more work must focus on bringing out the effect of other contextual factors affecting humor in science. It is crucial since the contextual factors like audience reaction and other social cues subtly influence how the content reaches the listener. Such cues also play a key role in keeping the proportions of humor and scientific content in the correct amount. To put these concisely, humor must not affect the content and mar the audience expectations in the process. To achieve this and make science fun in the right manner, social cues and contexts of humor become essential.

+ posts
Enjoyed reading the article, give us a like.

Have an upcoming oral presentation, paper presentation, or any other event? Do not just talk, but communicate with your audiences.
Get In Touch

We help you communicate