What are science shops? Does science need them?

-
0
“Yes, I’d love to have a garden of my own–spacious and full of everything that is fragrant and flowering. But if I don’t succeed, never mind–I’ve still got the dream.” A beautiful quote from Ruskin Bond’s Book of Nature. Many of us, just like the protagonist of the story, often nurture the dream of a beautiful garden, a pit stop for the buzzing bees, swirling butterflies, and bemusing birds. At times we amusingly fail at having a seed to sprout, keeping a plant alive, or knowing what plant will thrive in what season. During such days, the gardener in us yearns for expert advice, without which we fail to maintain gardens of our own. And to nurture gardens and gardeners, to create a natural garden movement, the different institutions in Germany came together for the Thousands of Gardens campaign. By allowing the expert scientists and gardeners to come together, the campaign aims to promote knowledge among people, promote native plant varieties and protect insect diversity. From the science communication perspective, the campaign finds support from an interesting institution, a science shop. It is the Bonn Science Shop, which began in 1984 by a handful of students. But, wait, what is a science shop? Is it a shop where one goes to buy some science or scientific opinion?

What are science shops?

Well, purchasing a scientific opinion will be as unethical as asking a physician to endorse a specific medication. It is not what the science shops entail. A science shop is a  “unit that provides independent, participatory research support in response to concerns experienced by civil society.” Science shops are research units, that help find solutions to the problems of society, by offering to do research for them. These allow the combination of education, research and outreach in one place. They offer many benefits, some of which include: Science shops differ from the paid research consultancy models. Here, the respective agency provides the layman participatory research support and access to science. The idea is to promote science in society and not-for-profit activities. Thus, the science shops are either funded by the parent institution or independently run operations they find support from other funding agencies. Some of the different kind of shops include Bonn science shop, Germany; Forschung, Bildung und Information, Austria; Pax Mediterranea, Spain and Interchange, United Kingdom.

Why would anyone reach out to a science shop?

When you want to buy a product from an e-commerce platform, you do research. You read reviews, look into the product details, maybe even ask people in your social circle about the brand or the product itself. But when wanting to resolve issues related to the impact of climate change on your local surroundings, issues of urban ecology, or even a farmer wanting to improve his farm’s yield, online reviews and social circles do not always come in handy. Even in the thousand gardens campaign, the activities from a science shop support and encourage science-based gardening networks. Likewise, the members of civil society reach out to science shops to seek help for the problems demanding science-backed solutions. Conducting the research helps understand various phenomenon either through observation or experimentation. By understanding the phenomenon, people can take better decisions, and they may approach science shops for this purpose.

How do science shops function?

Science shops function via different structures. A science shop could be run as a department in a university, research institute, or independently by non-profit organizations or for-profit companies. Irrespective of the structure, the science shops interact with different stakeholders. These can include public libraries, museums, local governments, foundations, welfare organizations, schools, other educational organizations, local communities or other civil society organizations. The next set of actors is the coordinators and staff who interact with the citizens acting as intermediaries, specifically in university setups. Then come the expert researchers and students (in a university setup) who conduct research to solve the problem. The stakeholders pose problems to the staff of the science shop, who then take up the issue for further research. The nature of queries received by science shops depends upon its scientific focus. Depending on the organizational model, the results from the research can be disseminated in different forms. These include: In university settings, it can form the participating student’s dissertation project.

What factors influence the success of the science shop?

As science shops function in social settings, thus the success or failure depends on the following four factors:

It refers to the maturity and differentiation of the civil society, which is expected to view and pose their problems in a science-based context. It also includes how the scientific support remains needful and the degree up to which civil society organizations such as citizen groups or NGOs can voice their concerns.

It concerns the political culture’s support to citizen groups and society in fulfilling the research needs. The presence or absence of the public discourse around science and society also remain important. The traditions that the science shop can build upon and the degree of previous know-how about the concept of science shops among the public are also crucial.

The resource factor concerns the science shop’s to mobilize required human and financial capital. Moreover, the availability of resources by public policy for such work, and under what conditions also remain important.

Whether the need for dialogue between science and society at the level of national science policy formation remains recognized serves as a crucial factor. Moreover, the aim of such dialogue, topics of importance, and institutions considered for promoting dialogue also need to be understood. Another important consideration is whether the science shop model fits in the dialogue?

For example, in Europe, where the science shops remain prevalent, the RRI policy operates. As per the policy, engaging the different actors, from individual researchers to governments, through inclusive, participatory methodologies remains important. Hence, the science shops find a suitable place in the research and communication culture of Europe. Similarly, India’s draft SSR also mentions building synergies among all stakeholders in our scientific knowledge community and also about developing linkages between science and society. Science shops can serve as innovative ventures serving at the interface between science and society. They can also help take science down to the regional context and even serve science in highly diverse local languages in India.

Why do we need science shops for science communication?

Science communication involves a two-way process, wherein the communicator needs to listen to their audience before relaying information. The science shop structure provides such opportunity as the lay audiences reach out to these research units with the issues. In doing so, the set-up allows the science communicators to understand the context better and proceed suitably. At the same time, such sensitivity to their local conditions and framing of science accordingly helps citizen connect science with their daily lives. It can help diminish the aversion to science and its lack of recognition in day-to-day lives.  Science shops further can play an important role in risk communication as the public becomes a receiver and a partner in the process. Thus, it can allow people to understand where the risks stem from and not believe the random unrelated misinformation. Science shops also allow the scientists to take up activities and research at the regional level. It helps the regional researchers connect with the audiences and allows them to disseminate their work contextually. Scientists can also discover interesting research areas, raise awareness among the public already connected with the issue, and more. Simultaneously, the students (undergrad, postgrad or even PhD) that participate in science shops also gain valuable research and communication skills, project skills and more. They can also acquire critical thinking skills by developing the ability to connect science curricula with real-life problems. Hence, the science shop model undoubtedly presents numerous possibilities for promoting science among the public and cultivating scientific acumen among Indians. It can help many dreams become a reality through science.
Share on Facebook Share on twitter 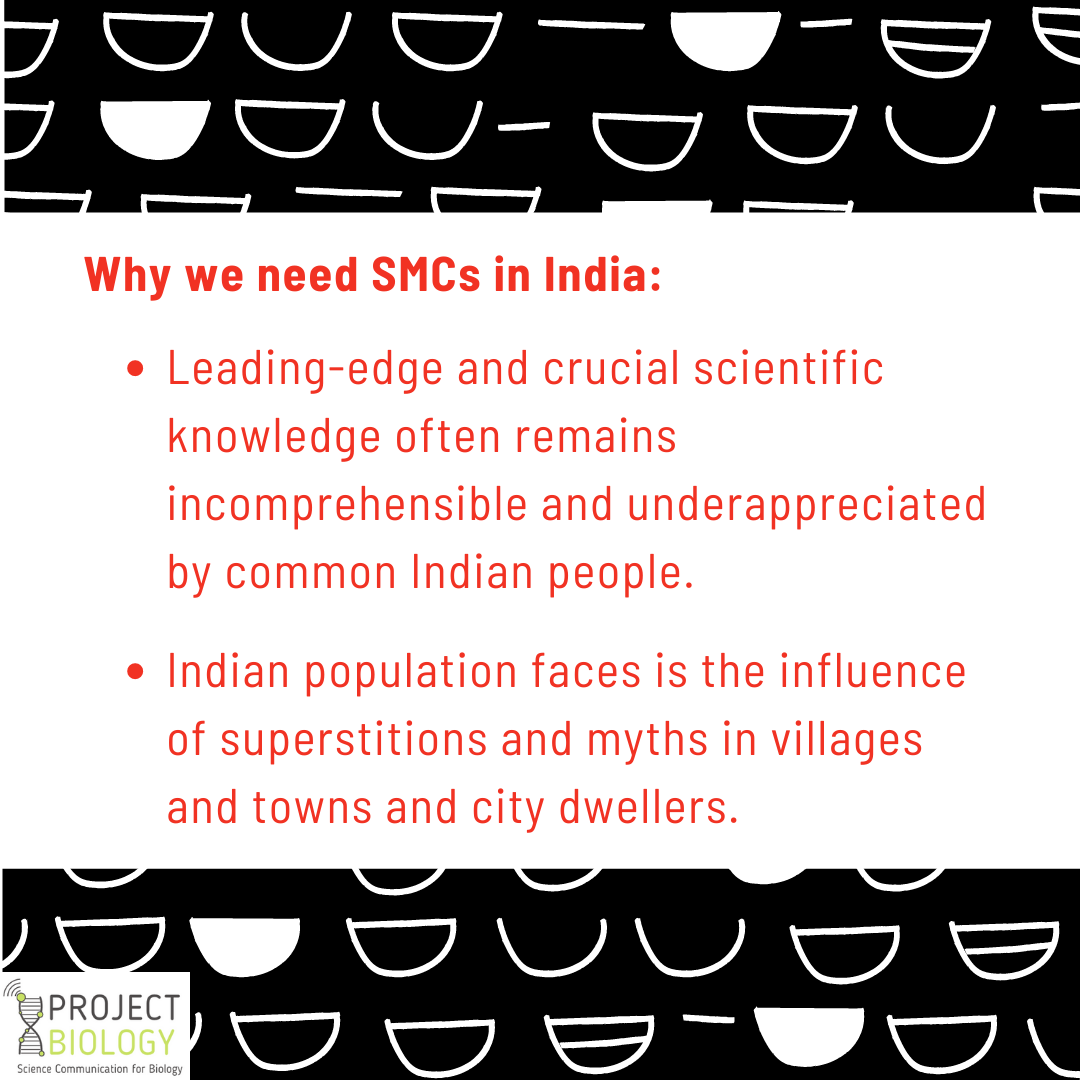 Science Media Centres: An answer to…